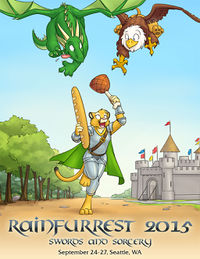 RainFurrest 2015 was the ninth instance of the RainFurrest convention. It was held over September 24-27, 2015,[1] at the Seattle Airport Hilton in Seattle, Washington, USA.

The convention's theme was "Swords and Sorcery".[1] The Artist Guest of Honor was Jan, Writing GoH Renee Carter Hall (Poetigress), Fursuit GoH RedHyena, and the Music GoH was Amadhia Albee.[2]

During RainFurrest 2015, a photograph began circulating on social media sites, showing an attendee wearing a soiled diaper in the convention space.[5]

Ultimately, the attendee's behavior and damages caused the hotel to be unhappy with the convention's staff,Plantilla:ClarifyPlantilla:Cn and it was later announced that Rainfurrest 2016 would be held at a different venue.[7] In early February 2016, however, it was announced that RainFurrest would not occur at all that year, due to the fact that the hotel they held the convention previously had already informed other hotels of the incident.[8]